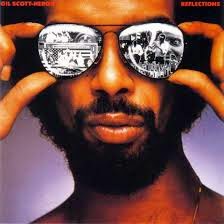 This week I have been mostly reading The Last Holiday a memoir by the late great Gil Scott-Heron which was published posthumously.
It gives an interesting account of his life with a focus on his participation in Stevie Wonder's Hotter than July tour and the campaign to have Martin Luther King Day recognised and proclaimed as a holiday.

As you would imagine it is beautifully written and also contains a number of snatches of his rhythmic street poetry which served as a forerunner to the rap movement.
I saw him perform in the Tunnel Nightclub in Glasgow.
I have a good few of his songs downloaded but somewhat shamefully I could only find one physical version of one of his songs and even then that was on a Mojo compilation - The Original Funk Soul Brothers and Sisters.