Hats of to The View 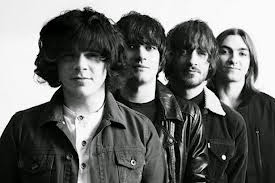 The View are four young whippersnappers from Dryburgh, Dundee whose debut album Hats of to the Buskers entered the UK album charts at number 1 on 28th January 2007 reflecting a fairly intensive period of hype prior to its release.
Although pretty raw in places it is full of youthful enthusiasm, confidence and energy.

George, if you listen closely on Superstar Tradesman you will hear your erstwhile hometown get a mention.
Whereas I quite enjoy the album I haven't really felt the urge to rush out and purchase any of it's three successors.