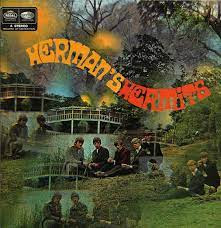 Apologies for the slight break in transmission. Internet problems with a new router required.

The next port of call on the Highlands Charity Shop trail was Dingwall. The main shopping street was deserted and a bit run down  perhaps due to the close proximity of Inverness. However all the shop staff were very friendly and I struck lucky on two of the the three charity shops. There is still a Wimpy Bar* there! (one of only 67 in the UK, with only 3 in Scotland the other two being in Fraser borough and Kilmarnock).But I digress!

I came away from Blythswood Care with a couple of LPs both a bit crackly but only a pound each. One was this compilation album by Herman's Hermits (a band from the Wimpy generation) They seem to have had an inordinate number of compiations  with Discogs listing 158!

There are 232 of this one for sale starting at £0.85.This one with the catalogue number SREG1117 seems to have originated from New Zealand. It is a Mickie Most compilation on the Regal label which appears to have been an offshoot of EMI with HMV getting a namecheck for manufacturing and distribution.

The two songs which I have selected, and which I'm sure that you are all familiar with, were written by Graham Gouldman of 10cc fame. He was not a member of the band  but rather was described by Wiki as a writer for hire coming up with best sellers for the Yardbirds, the Hollies and Wayne Fontana as well as the Hermits. Bus Stop was ahuge hit for the Hollies in 1966 but that did not stop Peter Noone and co from putting out their own version.