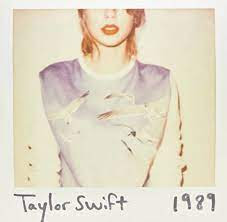 2021 Charity Shop Purchases 82 - Taylor Swift -1989
The wonderfully named Muir of Ord is the next village to Beauly. Last year we passed through it on a very wet Saturday going from holiday venue 1 to venue 2 and I had a brilliant haul from the Highland Hospice charity shop - Lush, Buffalo Tom,Teenage Fanclub, The Pernice Brothers and the Radar Brothers.
This year sadly was most disappointing. On the first visit I came away with nothing and on the second visit when it was raining again I came away with 1989 the 5th studio album by Taylor Swift from 2014 on Big Machine.
Now I have never knowingly listened to Taylor Swift but through osmosis I suspect that I have probably been exposed to her music. I thought I would spend 50p to see what all the fuss was about.
The verdict? Not really my thing but then again I am not the target audience. I have much worse records on the shelves. I listened to it the whole way through without a desire to turn it off and I may well listen to it again. As things stand it is a keeper.
I'm aware that Ryan Adams did a cover of the album in 2015.Given recent allegations against him I won't be seeking it out any time soon.
Taylor Swift -Welcome to New York
Taylor Swift -Blank Space
Bad Company yesterday, Taylor Swift today. What can I say?
Posted by Charity Chic at 08:00