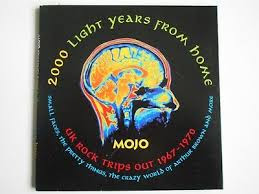 Named after a track from the Rolling Stone's 1967 album Their Satanic Majesties Request  this Mojo compilation from February 2018 is sub-titled UK Rock Trips Out  1967-1970.

The Pretty Things started off as a pure rhythm and blues band but by the late 60's they had embraced psychedelia including a 1968 soft rock opera S.F. Sorrow on which this song features.

Sadie's Expression were one of the main contributors to the Southend music scene from the  mid 60's to the early 70's. Presumably various members of Dr Feelgood were in the audience at one time or another.Taken from Nice -an Anthology of Peter Eden Productions.

Blone on Blonde were a guitar-led  psychedelic band from Newport, South Wales and named after the Bob Dylan album of the same name. Taken from 1970's Rebirth the second of their three album releases

Maybe this will stop the naysayer's like George and Spence  who feel that I am anti- Prog Rock. The cease and desist order has been put on hold meantime!

Sadie's Expression - Yesterday Was Such a Lovely Day

Blonde on Blonde - Heart Without a Home