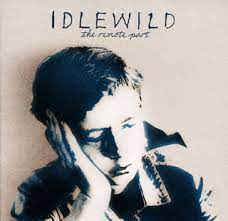 In addition to picking up Three by APB in Cancer Research on Glasgow's Victoria Rd I came away with The Remote Part the third album by Idlewild from 2002 on Parlophone.Someone had clearly taken the opportunity to donate some shouty Scottish Indie music.It joins 1998's Hope is Important on the shelves

I must admit that they were a band who passed me by although I did see them at Meadowbank Stadium in August 2005 when I was there primarily to see Teenage Fanclub and the Pixies.

I've come to them through a strange route namely lead singer Roddy Woomble's later folk career .I picked up the brilliant 2008 Before the Ruin on which he appeared with Kris Drever and John McCusker and then a couple of his solo albums.He also curated Ballads of the Book the collaborative album and concert at The Tramway between Scottish authors and singers.

Back to The Remote Part which was released to critical acclaim and peaked at number 2 in the Scottish album charts and number 3 in the UK and going Gold. I've selected the first two of the four singles from the album for your listening pleasure.

Idlewild - You Held the World in Your Arms