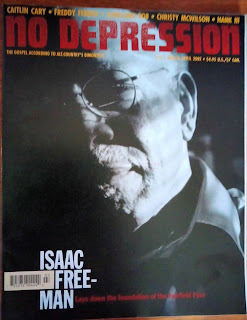 No Depression - The Bi-monthly Journal of Alt- Country
#38  March to April 2002
This one took a little bit of detective work as I had never heard of Isaac Freeman.
It turns out that he was a gospel singer of high repute singing in bands including The Skylarks and more famously The Fairfield Four.
I've a number of gospel compilations but neither of these bands feature. But fear not I've found some stuff for you.
He is featuring in No Depression as he was shortly about to release an album called Beautiful Stars performing as Isaac Freeman and the Bluebloods on Americana's favourite label at that time Lost Highway. I've managed to *ahem* acquire a track from the album for your listening pleasure.
This informative article from Nashville Scene following his death in 2012 highlights some of the many stars he has played with. He appeared with Elvis Costello at London's Queen Elizabeth Hall
He also appeared in the film O Brother,Where Art Thou?  as one of the deeper-than-the-bottom-of-the-well voiced gravediggers near the end of the film (Allmusic)
This was not his first foray into film as the Fairfield Four had backed Steve Earle on the mighty Ellis Unit One from  the soundtrack of the 1995 film Dead Man Walking.
Caitlin Cary whose name appears  in the top line of other artists featured  has enjoyed a career as a member of Whiskeytown as as a solo artist as and part of a duet with Thad Cockrell
Isaac Freeman & the Bluebloods - Lord I Want You To Help Me
Fairfield Four - Lonesome Valley
Steve Earle & the Fairfield Four -Ellis Unit One
Caitlin Cary & Thad Cockrell - Warm and Tender Love
Whiskeytown - Matrimony
Posted by Charity Chic at 08:00