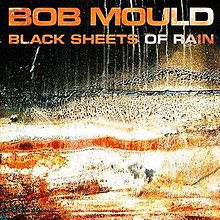 2021 Charity Shop Purchases 70 -Bob Mould - Black Sheets of Rain
Following our trip to Dornoch on the East Coast our next jaunt was to to West Coast and the Ross and Cromarty port of Ullapool where you get the ferry to Stornaway. I've a lot of time for Ullapool having spent three summers working as a waiter in the Royal Hotel as a student. We have since had a couple of holidays nearby and several day trips from holidays further afield.
I'm pleased to say that the Community Shop did not disappoint yielding an eclectic mix of CDs.I have a couple of albums by Hüsker Dü and the three albums by Sugar  but up until now I didn't have any of Bob Mould's solo albums. I must admit I had always assumed that his solo career had followed the demise of Sugar but in fact his first two solo albums including the second one 1990's Black Sheets of Rain on the Virgin label were from between Hüsker Dü  splitting and Bob forming Sugar.
Black Sheets of Rain continues in the vein of   Hüsker Dü  with some fairly relentness sonic guitar and vocals and with Bob being joined by the former rhythm section of Pere Ubu namely Tony Maimone on bass and Anton Fier on drums.
I'm happy to report that Bob is still going strong having having recently released a boxset called Distortion  and with a UK tour planned early next year. I'm not sure if I could handle seeing him live as my ears have never quite recovered from hearing Sugar at the Barrowlands.
This should set you up for the weekend.
Bob Mould - Black Sheets of Rain
Bob Mould - It's Too Late
Posted by Charity Chic at 08:00