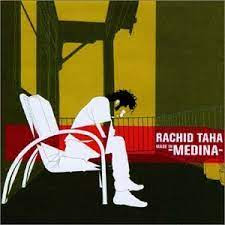 2021 Charity Shop Purchases 73 - Made in Medina
Until now I was only familiar with French - Algerian rai artist Rachid Taha from his take on the Clash song Rock the Casbah one that,I think, the band would have approved of.
Therefore it was a bit of a no brained to pick up Made in Medina particularly as it was going for only 50p. Released in 2000 on Barclay Records it was arranged and produced by Steve Hillage. I'll say that again - Steve Hillage! Who ever thought that name would appear on these pages?
But don't let that put you off, it is terrific stuff.
Allmusic writes Medina has an extremely coherent sound, built on prominent, danceable rhythms, strong melodies, and powerful vocals, all shot through with a Middle Eastern flavour while the Washington Post no less calls it an ecstatic union of Algerian rai and Western rock, techno and funk. That's good enough for me.
As well as being a singer Rachid was an activist.He suffered from Chiari malformation and sadly died from a heart attack in his sleep in September 2018 six days short of his 60th birthday.
Although not on the album I couldn't not share Rock el Casbah with you
Rachid Taha - Barra Barra
Rachid Taha - Medina
Rachid Taha - Rock el Casbah
Posted by Charity Chic at 08:00