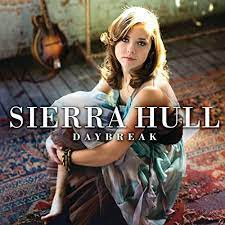 2021 Charity Shop Purchases 67 - Sierra Hull - Daybreak
Still on the Americana bus I'm afraid. I considered mixing them up a bit but decided to post the holiday purchases chronologically.
Daybreak by Sierra Hull, the second Beauly purchase, was a bit of a semi- educated punt given that the name was vaguely familiar and because it was on Rounder Records which is usually a sign of quality.
A quick Google in the pub advised that she is a Bluegrass singer-songwriter, mandolin player and guitarist and that Daybreak was her second Rounder release from 2011. She was signed by Rounder when she was only 13 and just 20 when she recorded this.
The Bluegrass is less Be Good Tanyas and more Alison Krauss and perhaps it is no coincidence given that the album was produced by Union Station bassist Barrie Bales. It's getting filed in the mainstream country section and would almost certainly  have featured on my Bluegrass Monday series if I'd had it at that time.
While it is a bit mainstream in place Allmusic describe the track Don't Pick Me Up as acid - grass which is a new sub-genre  to me and also ensures that it features below.

Sierra Hull - Don't Pick Me Up