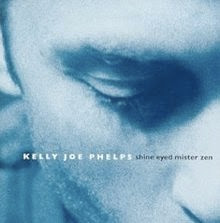 2021 Charity Shop Purchases 65 - Kelly Joe Phelps -Shine Eyed Mister Zen
In May when we spent a couple of nights in Grantown on Spey we visited the Kingussie Community Shop for the first time. I came away with a few CDs including two by Blues guitarist Kelly Joe Phelps. A couple of weeks ago we visited  it for the second time I came away with another Kelly Joe Phelps album!
I strongly suspect that I missed it first time round and that it was sitting on the shelves waiting for me to return.
This time round it his third album Shine Eyed Mister Zen from 1999 and as with the others I have on the Rkyodisc label. The title relates to KJP's description of his playing and all the tracks were recorded at his house in single takes.
Bill Frater of Freight Train Boogie wrote this is peerless music that one hears with one's soul as much as with one's ears.
It looks as though there are at least 8 more albums out there so I will keep my eyes peeled on my next visit to Kingussie.
Kelly Joe Phelps - River Rat Jimmy
Kelly Joe Phelps - Train Carried My Girl From Town
Posted by Charity Chic at 08:00