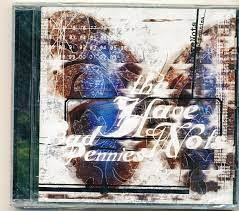 I saw The HaveNots supporting Laura Cantrell in The Subway in the Cowgate, Edinburgh. I know this not because I remember them, but because I came across the ticket in my tin.

I've had a CD single of the song Learning How to Whistle by them for ages. It has a blurb attached suggesting it may have been a promotional single , maybe even picked up at the aforementioned gig.

The blub reads Taken from the brand new album Bad Pennies. This debuting 19 and 22year old girl-boy act from the Midlands (Leicester based duo are 22 year old Liam Dullaghan, and 19 year old Sophia Marshall )offer hope for theUK's Americana scenr. The album is a strong body of varied tunes, combining the ambient influences of Mazzy Star and Cowboy Junkies with an edge that recalls emo-pop or Son Volt at their most angsty - Tim Perry (The Independent).

Now that all sounds very promising but I must admit to being pretty disappointed following my first listen to the album (from 2003 on the Circus 65 label) which I picked up in Ullapool having recognised the name.

I've selected the three songs that appear on both the single and the album. I'm not entirely convinced that the album is a keeper

The HaveNots - Learning How to Whistle

The HaveNots - All the Wrong Wounds