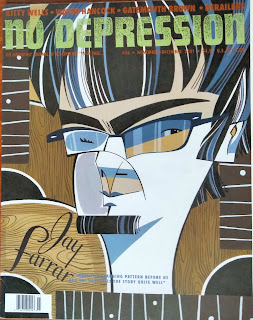 No Depression - The Bi-monthly Journal of Alt- Country
#36 -  November - December  2001
Americana royalty this time round in the shape of Jay Farrar who alongside Jeff Tweedy were the leading lights in the legendary band Uncle Tupelo  one of the founding fathers of the Alt- Country movement and who recorded the song which gave the magazine its name.
Following an acrimonious spilt with Tweedy he went on to found another legendary Alt- Country band Son Volt.Tweedy. of course, went on to form Wilco.
The main article in this edition focuses on the release of his first solo album Sebastopol on the Atremis label.
The album got its name in a roundabout way.Vestapol is a form of guitar  tuning the name being taken froman early blues song Sevastopol named after a city in Russia (now in Ukraine). Sebastapol is a small semi- urban community located on the western edge of the Santa Rosa plain in Northern California and was chosen as the title by Farrar as it just sounded better .Keep up at the back.
An album I picked up in Stranraer in late November 2015 as part of my largest ever Charity Shop Americana haul. 8 albums in total for 75p each. Coincidentally No Depression by Uncle Tupelo was one of the others.
My ticket tin informs me thaat I saw him play at the 13th Note Club in Glasgow's Clyde Street on 31st March 2001 when he was presumably promoting this album.
It seems only fair to feature a  couple of tracks by the two bands of which he was a member together with a song from Sebastopol.
For the other arist from those name checked on the magazine's cover it was a toss up between Wayne Hancock and the Derailers. As  Wayne has featured more frequently here I have gone for The Derailers with a track from their album Full Western Dress which was also a charity acquisition.
Uncle Tupelo - No Depression
Son Volt - Last Minute Shakedown
Jay Farrar - Barstow
The Derailers - Someone Else's Problem
Posted by Charity Chic at 08:00