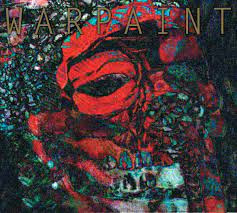 Warpaint are a band that I am only very vaguely familiar with and even then that is only because they have made a number of appearances at Swiss Adam's place.

I was intrigued enough to take a punt on their 2010 debut The Fool on the Rough Trade label in a Fort William charity shop and I'm really glad that I did.

From Los Angels and often described as dream pop the line up on the album is Emily Kokal on vocals and guitar, Jenny Lee Lindberg on bass,Stella Mozgawa on drums and Theresa Wayman on vocals and keyboards. The album is produced by Tom Biller with two of the songs mixed by Andrew Wetherall  with a subsequent Record Shop Day re-release with mixes of all the songs by Wetherall

The album was critically acclaimed with an average rating of 7.5 out of 10 which sounds just about right to me. Laura Snapes in the NME gets somewhat carried away writing that the dark purple rumble and hypnotic coo of their vocals swim along, dragging the listener beneath its beguiling surface into a swathe of subtle time changes and guitar prone to sudden swan dives into heart-stabbing gold arcs from oil painting-thick landscapes. In layman's terms - worth a listen.

Warpaint - Set Your Arms Down