Seen at King Tuts - The Men They Couldn't Hang 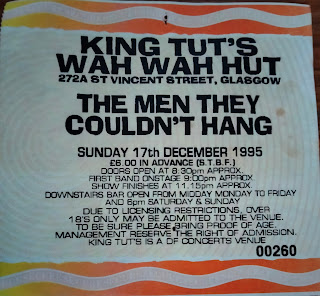 The Men They Couldn't Hang

This was the only time that I got to see the legendary folk punk band The Men They Couldn't Hang live.

It was one of the few times at Tuts that I have ever seen a barrier to stop enthusiastic fans invading the stage.Once the music started it was easy to see why as everyone was jumping and singing along to their anthemic favourites.

TMTCH were on the go from 1984-1991 and then from 1996 onwards (according to Wiki although I saw them in December 1995) They probably featured a number of tracks from their forthcoming album Never Born to Follow but most folk were there for the classics from their earlier albums.

Their first three albums Night of a Thousand Candles (1985. Demon) which I've just put on, How Green is the Valley (1986, MCA) and Waiting For Bonaparte ( 1988, Magnet) are absolute must haves.

Their version of Eric Bogle's  epic The Green Fields of France (No Man's Land) is one of my favourite all time songs. I'm not posting it today as it has appeared here many times before. Worry not, however, as these three (one from each of the first three albums) although not quite the same standard are also very good indeed.

The Men They Couldn't Hang - Ironmasters

The Men They Couldn't Hang - The Ghosts of Cable Street

The Men They Couldn't Hang - The Colours