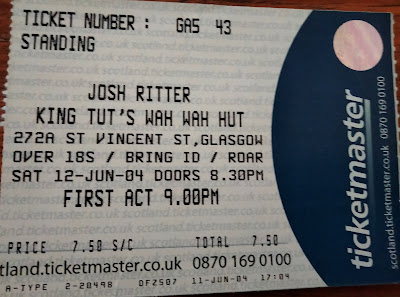 Josh Ritter
Saturday 12th June 2004        £7.50           Ticket Number GA5 43
When you get American acts touring Britain it is usually with a view to promoting a new album. However on this occassion this does not appear to be the case.
Hello Starling was released in September 2003 so it is safe to say that a good few songs from it featured.The follow up album The Animal Years was not released until March 2006 albeit it was recorded between March and May 2005. I suppose that there was a small chance that early versions of a couple of the songs featured.
I can't remember. I do remember though that a number of songs from his debut and my favourite 2002's Golden Age of Radio featured.I'm    guessing that one of The Felsons , The Radio Sweethearts or Sunshine Delay were the support act. They usually were whenever an Americana artist played at Tuts.
I've no idea what the reference to ROAR is on the ticket. Audiences at Tuts seldom need encouragement to make themselves heard.
Here are three songs which almost certainly featured.One from GAOR and two from Hello Starling.
Josh Ritter -Harrisburg
Josh Ritter - Kathleen
Josh Ritter - Man Burning
Posted by Charity Chic at 08:00