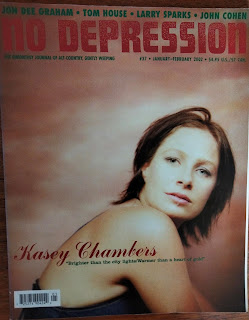 No Depression - The Bi-monthly Journal of Alt- Country
#37 - January -February 2002
So far in this series the articles featuring the cover star have been primarily around the release of a new album. This time around it seems to be about introducing Austrailian singer Kasey Chambers to a wider American album.
By this time she was obviously well known in her homeland particulary as from a young age  she had been appearing as part of the Country group Dead Ringer Band alongside father Bill, mother Diane and brother Nash.
She had also released two solo albums 1999's The Captain and 2001's Barricades & Brickwalls (both produced by Nash). She was already making waves in Europe and I had seen her a couple of times  in Glasgow by this stage.
The article claims that she was on the brink of becoming alt-country's brightest star. Sadly, I don't think that really happened given that following the release of 2004's Wayward Angel she slipped into relative obscurity with the possible exception of her home country.She states in the article that she doesn't want to be a star or to be famous but that in 20 years time she wants to be like Lucinda Williams or Shania Twain.Lucinda can walk down the street but she can sell out 2,000 seaters.
The article also stated that she has the rarest of vocal gifts:the ability to convey two contradictory emotions at once.
As an aside I wonder who does have the accolade of alt- country's brightest star. Ryan Adams or Lucinda perhaps? Or Neko Case, Gillian Welsh or Jeff Tweedy? Your suggestions are welcomed.
One from each of the first two albums for you today. The only other artist namechecked on the front cover that has crossed my radar is Austin's Jon Dee Graham who I've seen a couple of times and have a couple of albums by.
Kasey Chambers - The Captain
Kasey Chambers - Not Pretty Enough
Jon Dee Graham - $100 Bill
Posted by Charity Chic at 08:00