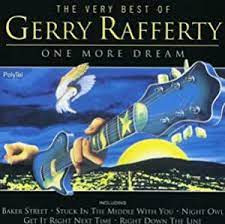 We squeezed in a visit to the Highland Hospice shop in the small and pleasant  Sutherland town of Dornoch between a pub lunch and a walk on the beach and I came away with a couple of purchases and Mrs CC got some plates.

I was initially a wee bit wary of picking up a Best Of  by Gerry Rafferty as I already had City to City, Night Owl and the Days Gone Down Anthology. However the Anthology only goes up to 1982 and I am not familiar with any of his other solo albums.Fortunately  there were seven or eight new to me tracks which was enough for me to take the plunge.

One each from three of his albums I don't have I think. From 1980's Snakes and Ladders and not included on the Anthology we start with The Garden of England. We then fast forward to 1988 and the album North and South. There were two or three to choose from but I have gone for the wonderful Shipyard Town.

We finish with the title track of his second last album from 1994 Over My Head . I say second last but it is probably actually his third last as Rest in Blue has recently been released posthumously

Gerry Rafferty - The Garden of England

Gerry Rafferty - The Girl's Got No Confidence