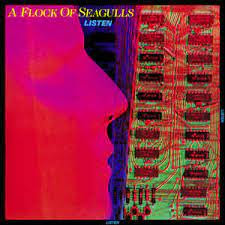 Something a little bit different for you today. As I was busy amassing CDs in the Community Shop in Ullapool Mrs CC handed me Listen the second album by Liverpool's A Flock of Seagulls from 1983 and on Zomba Records.

A band that I was only familiar with via their singles and it will probably stay that way.This album contains one of their two biggies namely Wishing (If I Had a Photograph of You) with the rest being new to me. They had big hair if I remember correctly and were fond of using brackets.Very 80s.

Their other biggie was I Ran (So Far Away), (brackets again) from their self titled 1982 debut album and as I'm not likely to feature them again any time soon I'm throwing it in as a bonus.It is one I quite like.

You won't be surprised to know that they are still on the go and performing on the retro circuit although I suspect that the big hair has long gone by now.

A Flock of Seagulls - Transfer Affection

A Flock of Seagulls - I Ran (So Far Away)