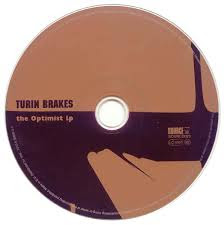 After the holidays I returned three CDs to a local charity shop, 2 duffers and a doubler, Turns out I already had If The Oceans Get Rough by Willie Mason..I knew I had a couple of his but wasn't sure if this was one of them.It was.
As you would expect when I handed three in I ended up coming away with three new ones.
Turin Brakes are one of the many bands that I have heard of but have not really heard. The only thing of theirs I was familiar with was an excellent cover of the Rolling Stones song Midnight Mile which I have on a compilation and which I have featured here before.
I decided to take a punt on The Optimist LP which is their debut album from 2001. It was a good punt in that the album is very good indeed.
Further exploration  required I feel.