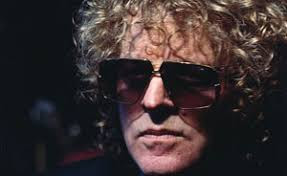 I used to have a double Ian Hunter and Mott the Hoople album which has gone missing somewhere along the way leaving me with only The Best of Mott.
Therefore when I stumbled upon The Journey a 53 song 3 x CD Retrospective of Mott and Ian  for 3 quid in a Pitlochry charity shop it was a bit of a no brainer.
However, sadly it has proved to be somewhat of a disappointment.
With the exception of the  9 songs which are on the best of Mott there are probably only about another half a dozen which I would describe as reasonably good.
With the exception of the magnificent Once Bitten Twice Shy, his only hit single, I felt that the solo stuff from Ian Hunter was particularly poor. To be honest I struggled to pick out a second number before opting for Standin' in My Light a song from his 1979 album You're Never Alone with a Schizophrenic.
Rightly, you would never get away with an album title like that these days.

Ian Hunter - Standin' in My Light
Posted by Charity Chic at 08:00