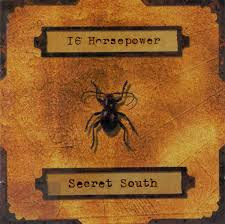 For once I didn't come across too much Americana during our trip up North. It has been a fertile hunting ground in the past but not this time.
I did manage to bag a couple though.
The name 16 Horsepower rang a bell in the deeper recesses of my mind when I picked up 2000's Secret South in Pitlochry but it was only later that I discovered that it was on the legendary (to me at least) German Glitterhouse label.
Sure enough back home I checked and I have a couple of their tracks on Glitterhouse compilations including one from this album.
They are out of Denver. David Eugene Edwards is the head honcho ably supported by Steve Taylor on guitar, Pascal Humbert on bass and Jean-Yves Tola on drums.
The album was recorded  and self produced in a cabin n the mountains around Denver and then mixed in Bath.