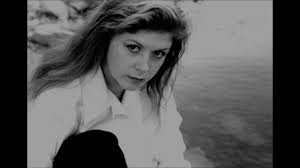 As you would expect the late great Kirsty MacColl has graced these pages before.
However her early stuff has never featured.
Chip shop could I supposed be described as a novelty record of sorts. If so, there are few if any better.
As for A New England she takes an already great Billy Bragg song to an altogether higher level.

That's the holidays pretty much over. Normal service shall resume shortly.
Hope you enjoyed this little interlude

Kirsty MacColl - A New England
Posted by Charity Chic at 08:00