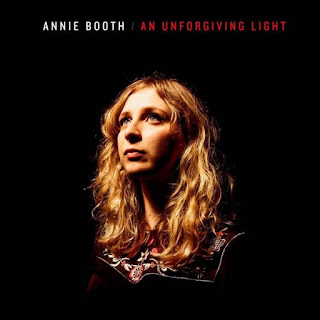 On Friday night I attended the Hug and Pint in Glasgow for the second evening of  the album launch of An Unforgiving Light by Annie Booth the first having been at Edinburgh's Sneaky Pete's the previous evening.

A collaborative release by Last Night From Glasgow and Scottish Fiction proof, as if proof was needed, that the future of Scottish music is in safe hands.
I saw Annie play a nervous but faultless  acoustic set when supporting Sister John back in September.This time out surrounded by her band (Ross Campbell on guitar, Craig Stoddart on bass and Rohan Bumbra on drums and a keyboard player whose name I missed) she was far more assured.

She was ably supported by young Jared Celosse  and by Jo Whitby who performs as Laurence Made Me Cry.

As you would expect her set concentrated on show casing the new album with a couple of older numbers thrown in for good measure. I was particularly taken with her recent singles Chasm and Over My and The Line where she was joined  on stage by Leo Bargery from the other band that she is a member of  Mt Doubt.

The album is available on both vinyl and CD.
An exclusive bonus for Charity Chic Music readers  from our good friends at Last Night From Glasgow who have kindly offered a 25% discount on all their non-sold  out releases for a two week period here by using the discount code in the comments section below.

Pay day shortly and Christmas is coming up so please take them up on this extremely generous offer. Thanks Ian!