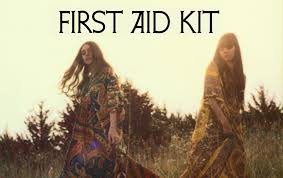 We have featured Americana here many times before (too many ......  that's enough of that - Ed) and Americana from Canada and Britain. Today it is the turn of Sweden
First Aid Kit comprises of sisters Klara (vocals and guitar) and Johanna (vocals/keyboard/autoharp) Söderberg
They started out in  their native Sweden since 2007  shooting to international fame in 2008 with their You Tube version of Fleet Foxes - Tiger Mountain Peasant Song

Here is the title track from that album together with This Old Routine.