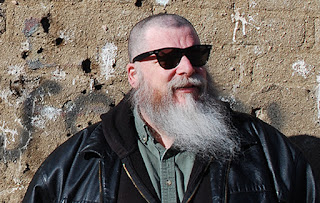 The Swede  passed on to me the very sad news of the death of Robert Fisher who had been suffering from cancer.
I'm sure he will post his own tribute but I felt that  I should also mark Robert's passing
Although he  occasionally sang solo  as seen below  with a number from the Song Circle 2002 acoustic album he recorded with Steve Wynn, Deanna Varagona and Walter Salas- Humara he is best remembered as the front man of Americana band Willard Grant Conspiracy
Founded in 1995 in Boston they have released a number of albums on labels such as Glitterhouse, Rykodisc and Loose with 10 studio albums and 4 live albums to  their name.
Sometimes I thought that his music was a wee bit bleak even for me but there is no denying that he had a fine voice and that he was a very good songwriter.
Rest easy big man.