May The Force Be With You 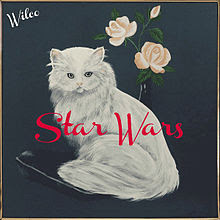 Like many of you I suspect I took advantage of the free download of Star Wars by Wilco upon it's release in July 2015. Let's face it, it is not the kind of offer that you would turn down.
Having said that the download lay in a folder on my PC for well over a year before I finally got round to playing it.

I've documented it before but Wilco and I began to take diverging paths around the turn of  the century. I loved them up to then but their music and my tastes fairly rapidly began to go in opposite directions.
However, I quite liked Star Wars. Would I pay full price for it? No Would I pay a couple of quid in a charity shop? Probably.
Being an old fashioned sort of bloke I stuck a copy on a CD to play in the car.No details as to the track names were forthcoming and I  opted for tracks 3 and 6  which I now know to be Random Name Generator and Taste The Ceiling

Wilco - Taste The Ceiling
Posted by Charity Chic at 08:00