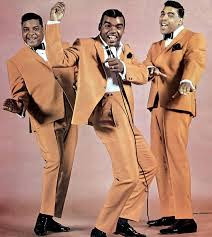 Some mid 60s Isley Brothers for you today from their Motown period when there were only three of them recording - O'Kelly Jr, Rudolph and Ronald.
This represented their first purple patch prior to the extended version going down  a more funkier route in the mid 70s.
Behind a Painted Smile is perhaps a portent of things to come
They have been performing in various guises since 1954.
Purchased in the Canine Rescue Charity Shop in Newton Stewart affectionately known to Mrs CC and I as the Smelly Dog Shop.

The Isley Brothers - It's Out of the Question

The Isley Brothers - No Place to Run

The Isley Brothers - Behind a Painted Smile
Posted by Charity Chic at 08:00