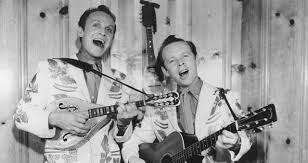 Today we feature a couple of pleasant ditties from Ira and Charlie Loudermilk more popularly known as the Louvin Brothers the gentlemen who have previously reminded us that the word Broadminded spells S.I.N.

Their mandolin based Country gospel harmonies were heavily influenced by their Baptist faith and constantly warn us against sin. Satin is real after all.
Somewhat paradoxically Ira Louvin was a drunk womanizer with a fiery temper who was shot four times in the chest by his third wife after he allegedly tried to strangle her with a telephone cord. There is a country song in their some where.

However today the Louvins ask us Are you ready for the Great Atomic Power and also lament that You've already put big ole tears in my eyes, must you throw dirt in my face

The Louvin Brothers - Must You Throw Dirt in my Face
Posted by Charity Chic at 08:00