It's Drew's Fault - Yeah So 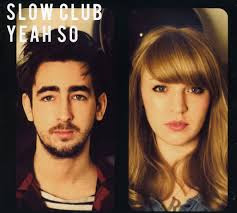 It was Drew who first brought Slowclub's Complete Surrender, surely the album on 2014, to my attention.
What a fantastic album it is.
Therefore when I came across their  2009 debut Yeah So  on Moshi Moshi records going cheap I thought I would give it a bash.
It is ok but certainly not in the same league as Complete Surrender
It falls just short of being twee
Here the Sheffield pairing of Charles Watson and Rebecca Taylor are described as a folk duo.I've even seen a comparison to the White Stripes but I don't see it myself.
By the time of Complete Surrender however as someone has previously mentioned (probably Drew) Rebecca had discovered that she has a voice and what a voice it is.

Slowclub - There is No Good Way to Say I'm Leaving You