Rabbits of the Frightened Variety 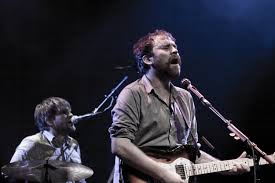 Selkirk's finest Frightened Rabbit started out as a solo project by Scott Hutchison.
By the time 2008's The Midnight Organ Fight came along he had been joined by his brother Grant on drums and percussion and Billy Kennedy on guitar,bass and keyboards.
Critically acclaimed with The Skinny going as far as naming it the fourth best Scottish album between 2000 and 2009.
Mainly recorded in a studio on Bridgeport, Connecticut it contains songs recorded in The Diving Bell Lounge and in flats  at 38 White Street, Partick and 2 Ruskin Place off Great Western Road,Glasgow.

When I was a student, long before Frightened Rabbit entered this world, I spent many a drunken night in Ruskin Place as some of my pals had a flat there.
Happy days.

Frightened Rabbit - The Modern Leper
Posted by Charity Chic at 08:00