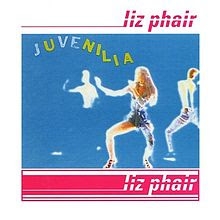 Liz Phair is an artist whom I don't know very much about.
My interest was slightly  piqued when I featured Big Tall Man from her 1998 album Whitechocolatespace egg last July on my Saturday Lucky Dip slot.
It was re-piqued  the other day when I came across Juvenilia for 49p in my local charity shop.
From 1995 it is an 8 track EP but is essentially a vehicle for the song Jealousy from her 1994 album Whip- Smart.
It also contains her cover of The Vapors classic Turning Japanese.
Tracks 4 to 8 are from her Girlysound tapes with relatively poor sound quality, plenty of swearing and a fascination around the sex lives of cows and are probably best avoided. Here are tracks 1 to 3.