This Blog Continues to Decline 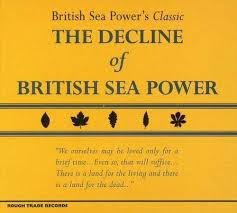 British Sea Power are a band I know next to nothing about despite the fact that they have been on the go since at least 2003.
I know that fellow bloggers have featured them with Drew and JC both recently and coincidentally featuring them on the same day.
I seem to recall that Singing Bear in particular is a big fan. I am missing your musings sir along with those of George , Scott and Erik and I hope that you will return to the fold in due course.

Given the above when I saw their above pictured debut album in a charity shop the other week I thought I had better pick it up to see what all the fuss was about.
On hearing the first two tracks I thought I had made a terrible mistake and was all set to re-dispatch it from whence it came.
However I persevered and rather enjoyed some of the other songs including the two featured below.
I much prefer their more mellow songs  to their shouty songs which  I suspect is probably an age  thing.

British Sea Power - The Lonely
Posted by Charity Chic at 08:00