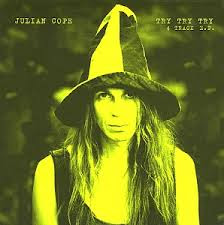 A couple of songs from his 1995 EP Try Try Try the only single released to promote his album from that year 20 Mothers and which somewhat surprisingly reached the dizzy heights of number 24 in the UK Singles chart.
Rooster on drums, Moon-Eye on guitars and Thighpaulsandra on synthesisizers and piano.