And I Know It Ain't Gonna Last 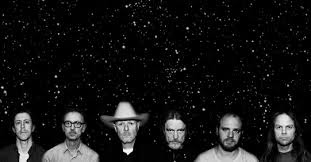 Opus 40 by Mercury Rev features on Across the Great Divide - the compilation of music inspired by The Band which featured on Saturday. Turns out Levon Holm played drums on this one.

This had me looking out 1998's Deserter's Songs and giving it a listen for the first time in years.One I don't really think that has stood  the tests of time.
A bit twee in places for me with excessive use of the mellotron. Also the fact that main man Jonathan Donahue is listed in the sleevenotes only as Jonathan and someone else is listed as Grasshooper annoys me far more than it should.

Like a similar act The Flaming Lips their star shone brightly for a short period before rapidly fading.
I have had the 2001 follow up All is Dream in my hand on at least two occasions in charity shops but never managed to cross that finishing line.

Mercury Rev - Goddess on a Hiway
Posted by Charity Chic at 08:00