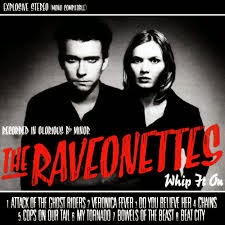 To the best of my knowledge the only other Danish artists in addition to Tina Dico to grace the CCM shelves are The Raveonettes.
They are a different beast altogether who make a somewhat splendid racket
Here are a couple of tracks from Whip It On their debut EP from as far back as 2002.
I saw them around then at King Tuts on the same bill as Razorlight. Needless to say they totally blew Johnny Borrell and his band away.
I know Drew is a big fan and I suspect that he is not the only one out there.
The Raveonettes are Sune Rose Wagner and Sharin Foo and it almost goes without saying that being Scandanavian they are very good looking.
However, unlike Tina, they have never had a number one in their native land (or anywhere else for that matter, I suspect).
This will wake you up!

The Raveonettes - Attack of the Ghost Riders

The Raveonettes - Do You Believe Her
Posted by Charity Chic at 08:00