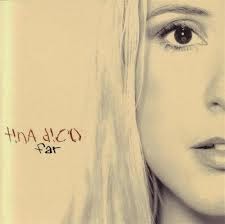 About a decade ago my pal Harry talked me into going to see Tina Dico at the ABC2  in Glasgow.
I suspect that he was attracted by her Scandanavian looks as much as her musical ability.
For she is Danish, born Tina Dickow Danielson in Aarhus in 1973. She is credited as Tina Dicow on some of her records. At the time she was based in London.
At the concert I purchased Far an EP from 2004 which I got signed and from which these songs are taken.
I subsequently purchased her 2005 album In The Red which made number one in her native Denmark.Warm Sand also features on this album
She has had 3 subsequent numer ones and a number two in her native country but more international success appears to have  unfortunately eluded her.
She now stays in Reykjavik

Tina Dico - Back Where We Started
Posted by Charity Chic at 08:00