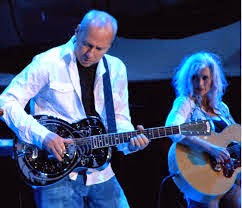 All The Roadrunning is a 2006 album by Mark Knopfler and Emmylou Harris which at the time completely passed me by despite it reaching number one in Denmark, Norway and Switzerland.
Apparently there had been a long term collaboration between the pair with the songs being recorded over a seven year period.
The majority of the songs are from the pen of Mr Knopfler with Emmylou only contributing two, the featured Belle Starr and Love and Happiness which she wrote with Kimmie Rhodes.

Perhaps one of the reasons it passed me by is that I have never been a particular fan of Dire Straits with the exception of Sultans of Swing which is a terrific song.
A few years ago I was working in a psychiatric hospital and we had a ward meeting with the patients to discuss some proposed changes. When we invited comments from the floor the first question  directed to my colleague was "Do you like Dire Straits?" Afterwards she confessed to being somewhat relieved in that it was a question she was able to answer.

Mark Knopfler and Emmylou Harris - Beyond My Wildest Dreams