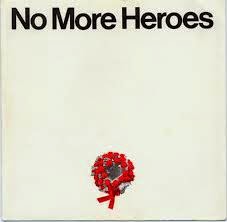 I suspect that Dirk's recent Stranglers posting led to me subliminally picking out No More Heroes The Stranglers second album from 1977 to play in the car.
And what a load of absolute tosh it is. The two singles are passable but everything else is a pile of pants.
I was going to say that unlike many of the contemporary new wave albums it hasn't really stood the test of time but I now suspect it probably wasn't very good in the first place.
I Feel Like a Wog is apparently a sarcastic attack on racism but still seems offensive whereas Bring on the Nubiles is blatantly sexist.
Subtle they were not.
Has not been played for ages and unlikely to be played again anytime soon.

The Stranglers - Something Better Change

The Stranglers - No More Heroes
Posted by Charity Chic at 08:00