The Only Way is Wessex 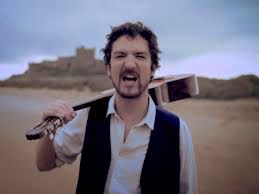 2011's England Keep My Bones is the fourth album by Frank Turner and the one which gave him a degree of national prominence.
As he correctly writes these are folk songs for the modern age.
Now in the same vein as Billy Bragg he may not necessarily be the most accomplished musician in the world or the best singer.But he believes and that's good enough for me.
Quite rightly he is fiercely proud of his Wessex roots and his English heritage but not I suspect in a UKIP sort of a way.
Frank is or was Straight Edge which I had to look up and is the abstinence from alcohol, tobacco and recreational drugs.
It doesn't appear to affect his performance though