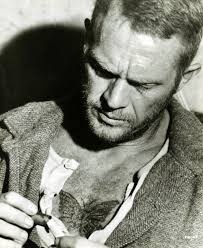 A quick pit-stop on the way back from Portpatrick to check out the three charity shops in Stranraer yielded meagre pickings.
Only one purchase - All That Is Now  -15 tracks from the best new albums an Uncut compilation from November 2013.
Being Uncut it is Americana heavy which suits me just fine..
First up are Okkervil River  one of the three Os - three bands beginning with the letter O who grace the O section of the Americana shelves the other two being Old Crow Medicine Show and Over The Rhine.

The O's are followed by a K , Mark Kozelek to be precise.A former Red House Painter and current member of Sun Kil Moon. Here he appears along with indie rock band Desertshore.
He also infamously recorded an album of AC/DC covers What's Next to the Moon.
A quick listen to the song will explain the relevance of the  Steve McQueen picture