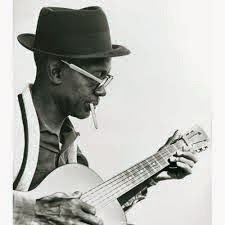 It's Lightnin' time.
Sam John Lightnin' Hopkins was according to Rolling Stone magazine the 71st greatest guitarist of all time.
He was also Houston's poet in residence for 35 years and was a mentor, friend and influence to Townes Van Zandt who in turn adopted the same role to Steve Earle -so an impressive legacy of quality music.

He allegedly recorded between 800 to 1000 songs during his long and illustrious career and reputedly recorded more albums than any other bluesman.
I'm not sure that Texas Blues is his best, indeed I'm not even sure that it is the best of the four Lightnin' albums that I own.
However it is part of The Blues Collection (number 31 of 90 in fact) so it is going on.
Recorded in New York on 15th December 1960 this album has him accompanying himself on piano and guitar.
It is easy to imagine him sitting noodling away and uttering the first words that come into his mind.
Indeed, the two songs chosen are somewhat rambling with unfeasibly long titles

Lightnin' Hopkins - Your Own Fault Baby, to Treat me the Way You Do

Lightnin' Hopkins - I've Had My Fun If I Don't Get Well No More
Posted by Charity Chic at 08:00