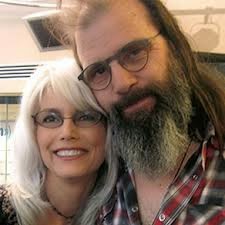 As threatened on my recent Gram Parsons post the first in a series of Emmylou and ...   featuring the great lady dueting with a variety of folk.
These two songs are taken from Train a Comin' Steve Earle's 1995 comeback album following his period of incarceration and one he is at pains to say that is not his unplugged record.
Probably my second favourite Steve Earle album after Guitar Town.
I saw them share a bill a few years ago at Hopetoun House, South Queensferry on the shores of the River Forth.
The first time I met Emmylou, she came in to sing on Guy Clark's first album. She gave me half of her cheeseburger. I wasn't the same for weeks. (Train a Comin' sleevenotes)

Steve Earle (with Emmylou Harris) - Nothin' Without You