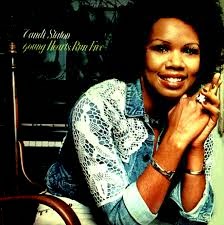 It is a welcome return to Soul Sunday for Darcy's favourite Ms Candi Staton.
Her 1976 album Young Hearts Run Free was purchased in St Andrews alongside last week's Betty Wright offering.
Tempting though it is I will resist posting the disco classic that is the title track as a) you should all be familiar with it and have it in your collection and b) it has already previously featured on CCM.
So instead you are getting the first track on the album and another great disco number Run to Me written by Dave Crawford who also wrote Young Hearts and who produces the album.
This is followed by Candi's  more soulful version of the Al Green number Living for You.
This is the third time that Candi has featured on CCM from three different eras with three different distinctive styles.
She can do no wrong

Candi Staton -Run to Me

Candi Staton - Living For You
Posted by Charity Chic at 08:00