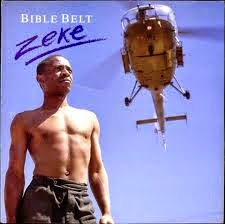 Although born in Zimbabwe  Zeke Manyika has spent the majority of his life in Britain some of it in Glasgow.
He was the drummer in Orange Juice from 1982 to 1984 playing on their massive hit Rip It Up.
He also played on Edwyn Collin's solo album Hope and Despair and he has played and toured with Paul Weller.
So, am impressive pedigree.
He has also recorded solo albums including 1989's Mastercrime which highlights the evils of the Apartheid system in South Africa and these two powerful songs are from that album.
I used to have a copy of a far cheerier number by him Walking in Kelvingrove  about the fine Glasgow Park but I can't find it. I suspect it may have been on cassette and therefore now festering in a landfill somewhere.