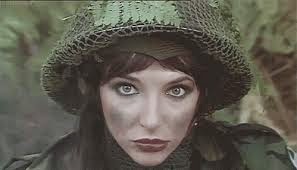 Kate Bush performed a series of live shows in August and September last year - her first for 30 years.
You may have missed it but there was the occasional reference in the media.

In short then an excellent excuse for Mojo to churn out a 30 page article and to accompany this with The Dreamers - 15 tracks of Kate Bush-inspired dream pop.
As you would imagine female voices are to the fore. Alas no mention of her heir apparent Alison Goldfrapp or indeed many bloggers latest favourite Jane Weaver.
There is still however some pretty good stuff on the CD and in particular the two tracks I have featured
Haley Bonar has been on the go for a number of years without a huge amount of success. Hopefully this will change if she continues to produce stuff as good as Last War the title track from her latest album
Poliça apparently are a synthpop and alternative rock band from Minneapolis.  Channy Leaneagh is the owner of the gorgeous voice which features on You Don't Own Me from their 2014 EP Raw Exit.