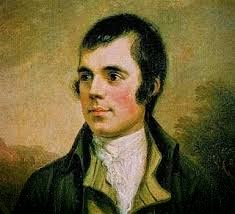 For  one week only Soul Sunday is having a well earned rest as we celebrate Burns Night as Robert Burns was born on this day in 1759.
Scots the world wide will be celebrating the life and work of the Bard with poetry, song and haggis, neeps and tatties all washed down with a few drams.

As well as being the most famous Scot of all time and a fantastic poet Robert Burns wrote many a fine song
Eddi  Reader has resurrected her career re-interpreting Burns songs and here she features with Green Grow the Rashes, O
She is followed by Rob Paterson with one of Burns' finest pieces of work A Man's a Man for a' That sung by Sheena Wellington at the opening of the Scottish Parliament.
These two songs are taken from a free CD from the Scotsman newspaper.
We go from one extreme to another with Parcel of Rogues from The Delgados a Peel Session from 26th January 2003.
Finally we have a worthy successor in the Bard of Dundee the late great Michael Marra

Rod Paterson - A Man's a Man for a'That

The Delgados - Parcel of Rogues