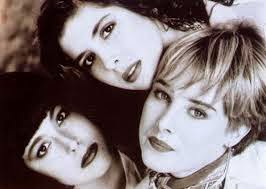 I kent yer Faither is an excellent Scottish put down often levelled at young whippersnappers who have gotten too big for their boots.
However in the case of Wilson Phillips this is not strictly true .It is more by association that I am familiar with the music of their fathers and indeed one of their mothers.
Carrie and Wendy Wilson are the daughters of Brian Wilson of Beach Boys fame whilst Chynna Phillips is the daughter of John and Michelle Phillips of The Mamas and the Pappas.
So children of pop royalty then and friends from a young age out in California.
Astonishingly their 1990 self titled debut album sold over 10 million copies which made them, at the time,the best selling female artists of all time for a single album.
These songs are taken from their 1992 follow up Shadows and Light acquired on my most recent charity shop excursion for a quid.
Pretty mainstream but pleasant enough pop music.
They lasted to 1993 before splitting only to have a series of inevitable reunions from 2004 onwards
They also have their own TV Reality show Wilson Phillips: Still Holding On which says it all really

Not to be confused with Wilson Pickett

Wilson Phillips - It's Only Life

Wilson Phillips - Give It Up
Posted by Charity Chic at 08:00