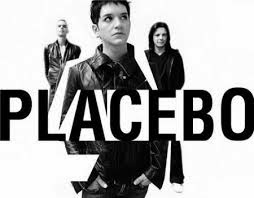 I never really got into Placebo.
The only record of theirs that I have is the 1997 single Nancy Boy.
The fourth single from their self titled debut album it reached the dizzy heights of number 4 in the UK singles charts.
Like many of their songs it centres around drugs,sex and bisexuality although this is the slightly watered down radio edit
I have part one of a two CD set and I am sure that their cover of Bigmouth Strikes Again will curl the toes of many a Smiths fan.
Whilst doing my "research" to this post I was amazed as to their longevity and to their success over the years. They slipped off my radar many moons ago.