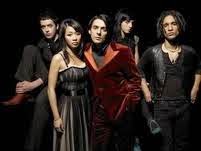 El Presidente were formed in 2002 by Dante Gizzi formerly of the Glasgow band Gun best known for their cover of Cameo's Word Up.
Towards the end of 2005 it looked as though they were going to make the big time following an acclaimed performance at T in the Park releasing their debut album, performing a Christmas show at the Barrowlands  and featuring in the Edinburgh  Hogmanay celebrations. However, it was not to be.
Their debut album, and indeed their only album, the self titled El Presidente  released in October 2005 on Sony reached no 57 in Britain and 59 in France but was a number one in Japan in 2006.
Obviously the world, with the honourable exception of Japan, was not quite ready for a glam rock revival. More's the pity.

El Presidente - Without You